Here I will talk about some of the work I do on Sesame street.
For my illustration work, please go here.

Recently, I had the honor of creating the wall graphics for Sesame Street's new company work space. I collaborated on a new look for our company, that included our new photography of the Muppets and a organic line art style inspired by classic Sesame Street artwork/storybooks. 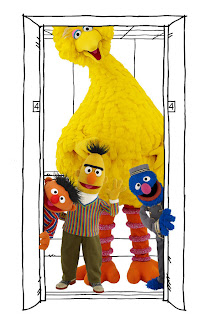 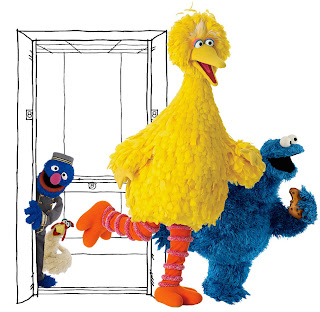 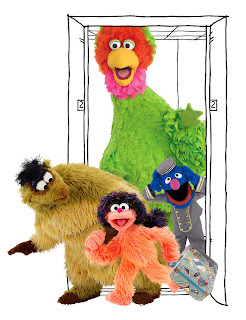 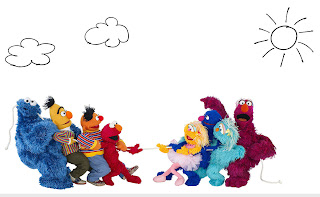 Here is a time lapse of the artwork going up recorded and edited by Design Director Mark Magner! 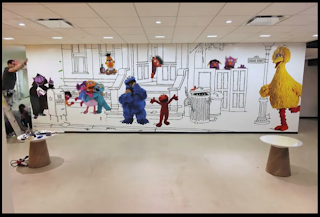 It shows employees from Signs of Success installing a Sesame Street mural in the lobby of our NYC office. The mural design was a collaboration. Illustration by Tom Brannon, Design by Nancy W Stevenson and Janis Beauchamp. Photography by John E Barrett. Art direction, retouching by Mark M Magner and Diana Leto.

I would also like to add that much of the photography was styled and directed by the wonderfully talented Louis Henry Mitchell.
Posted by Diana Leto at 10:10 PM 1 comment:

Everyone loves Friendship Week! Okay... maybe not everyone. 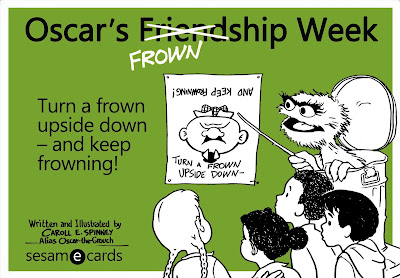 For Friendship week, I designed a "some ecards" spoof by creating an Oscar the Grouch SesameCard.

While assisting in the creation of this special on-screen storybook, I thought this portion where Oscar is describing how to turn a frown upside down into a frown again was perfect for the SesameCard!

I've been pretty busy lately but thought I would take a second to show some of my projects and photos taken on Sesame Street.

Here is my most recent poster collaboration with Design Director, Mark Magner, is our Glee spoof for the DVD release "Preschool is Cool: Making Friends". 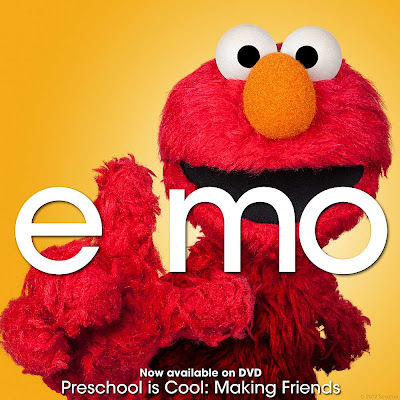 Was a lot of fun to set up the photo shoot with Louis Henry Mitchell who is a master at directing and styling the essence of the Sesame Street Muppets. Hopefully it also brings you a lot of glee!

I've also been collaborating on creating wall graphics for our company here at Sesame Workshop.
During our process, we have been trying out different Muppet photography. We had the opportunity to take photo's of Stinky the Plant. He looks a little cranky but I still think he had a lot of fun. 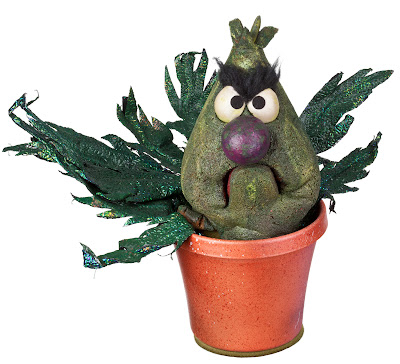 Jerry Nelson passed away this week and for those of you who don't recognize the name, you may recognize the names of the characters he has played: Sgt. Floyd Pepper, Robin the Frog, Camilla the Chicken, Gobo Frazzle Mr. Snuffleupagus, Count Von Count, Sherlock Hemlock, The Amazing Mumford, Frazzle, Herry Monster, and Mr. Johnson (aka Fat Blue) and Emmet Otter.

Jerry Nelson was not one, but several of the characters who shaped my childhood, made me laugh and made me cry. Losing Jerry Nelson is a great loss of an incredible talent. But his characters will live on forever. 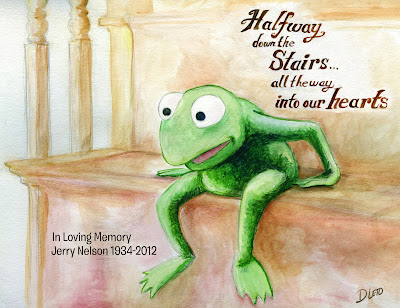 One of my personal favorites that Jerry puppeteered was Robin the Frog. My first encounter to Robin was on Tales from Muppetland's Frog Prince.  I will never forget the never-ending smile I had on my face (and still to this day just recalling it) while watch Robin and Kermit sing about a frogs life and hearing Robin figure out what  "Bake the hall in the candle of her brain" means.
An unforgettable Jerry Nelson performance is "Halfway Down the Stairs" as Robin the Frog (lyrics are from an A.Milne poem). This Muppet Show Segment is such an endearing and timeless moment that I wanted to pay tribute through this magical sequence.

Thank you Jerry for all you have done and brought to the world.
In memory of Jerry Nelson, 1934-2012.

For some more beautiful tributes celebrating Jerry's life and work, please go to the Jim Henson Legacy twitter and web pages.
Posted by Diana Leto at 9:59 AM 1 comment:

Was recently at a photo shoot involving the Sesame Street character walk-arounds for Sesame Place. I cannot show all the magical muppetized photos we took but thought I would share some of the good times we had.

Here, Cookie Monster surprised me by helping me out with the grey card. Thank goodness he didn't think it was a cookie! 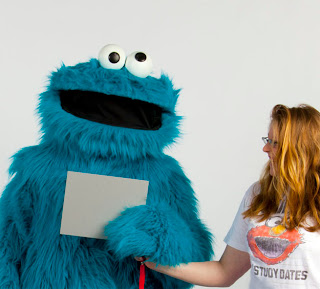 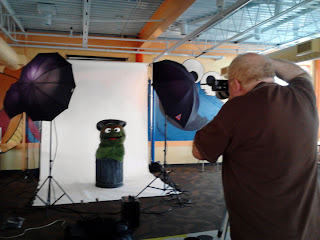 A sunny Day in the Life!

My most recent poster celebrates the release of our "Singing With The Stars" DVD. After brainstorming several ideas, I presented the idea of spoofing the iconic cover of The Beatles "St. Peppers Lonely Hearts Club Band". Art Director Mark Magner realized it was a perfect opportunity to create something very special for our fans. Sesame Street has a vast library of characters and fans love to see their old favorites, as well as a few hidden treats. 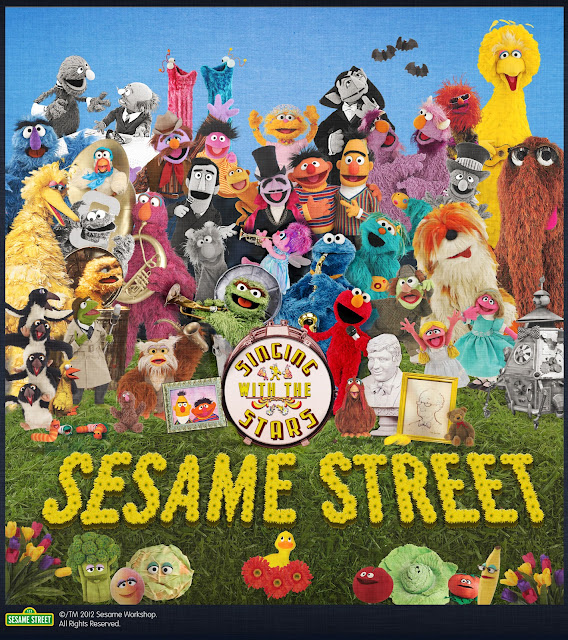 When Mark saw the statue in the foreground he immediately started searching for the bust of Joe Raposo, the composer who wrote many famous Sesame Street songs including the world-famous theme song. In some older skits with Don Music the bust od Beethoven was swapped out for a bust of Joe Raposo. Mark knew that would be a hit with the fans who recognized the inside joke. When I saw the wax figures of the original Fab Four, I immediately wanted to include some classic Sesame Street Muppets. Of course I had to include a rare, brown Oscar the Grouch, A thinly-feathered Big Bird, and unforgettable Herry Monster.

A few of Sesame Street characters were placed in positions where they had a friendly tie to the person/object on the original Beatles cover, such as Grover as the Mad Hatter in the position of Lewis Caroll, but most were placed strategically so we could include as much as the Sesame Street family as possible.

The spoof was posted today, May 3rd 2012, on social networks, Muppet Wiki and the Sesame Steet blog. So far the numerous responses are wonderfully heartwarming.
Posted by Diana Leto at 1:44 PM 1 comment:

Having fun with 'Big Elmo Fun'

This poster was created in celebration of the Sesame Street DVD, by the same name, Big Elmo Fun. 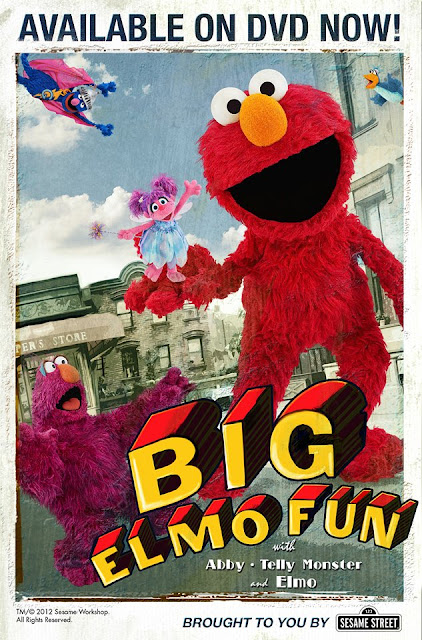 I've been creating some fun parody posters for Sesame Street that have proven to be a huge success. So, for this DVD feature I wanted to play up the the first segment where Elmo is accidentally turned big and towers over Sesame Street!

I turned to classic movie posters, such as 'King Kong', for inspiration. I wanted the poster to have an old fashioned horror movie feel but still keep the personality of Elmo cheery and Focusing on our great Sesame Street photography (Photography by John E. Barrett, Mark Magner, and art directed by Louis Henry Mitchell)


I created my own textures, filters, and typography to get the look and feel I wanted to achieve.


In less than 9 hours posted on Facebook,  the poster has proven to be one of the most popular parodies yet with over 3100 likes, 186 shares, and counting! 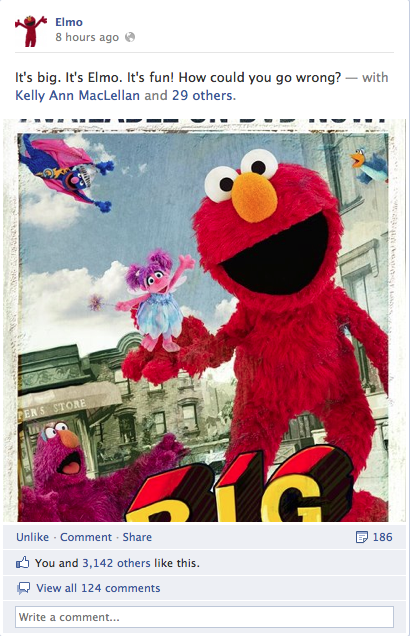 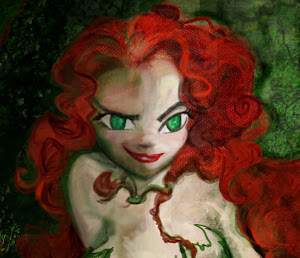